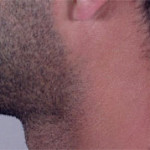 New statistics released today by the American Society of Plastic Surgeons (ASPS) show that chin surgery or chin augmentation has grown in popularity in the past year – surpassing breast augmentation, Botox and liposuction growth rates combined in 2011. Could video chat be to blame?

Overall there was a 71% increase in procedures in the past year – with a 76% growth in men alone.

“We also know that as more people see themselves on video chat technology, they may notice that their jawline is not as sharp as they want it to be. Chin implants can make a dramatic difference.” said ASPS President Malcolm Z. Roth, MD.

So the next time you log-on to Facetime and take a look at your sagging double chin, don’t worry – you’re not alone. And maybe you don’t have anything to worry about to begin with.